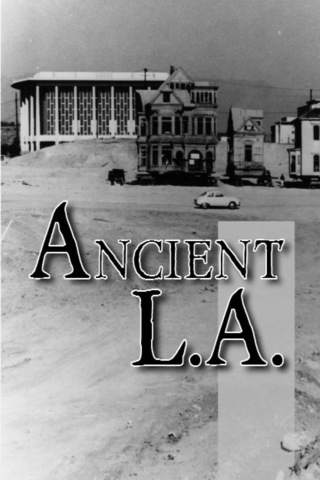 Two hundred feet above the crashing Torrance surf, a swimming pool sits unused through the night, its waters illuminating the condominium walls an eerie blue-green. On the grounds of the San Gabriel Mission, a cactus grows through its supporting wood slat trellis. On the outskirts of downtown, a roadside plaster statue wears a cracking painted checkered shirt and holds a black tire in each of its giant hands. In Inglewood, water trickles down the side of a drinking fountain while in Wilmington, a parrot lies dead in the grass and a run-over cat looses its shape decomposing into the asphalt of Pacific Coast Highway.

Why is our city the way it is? Why did it grow the way it grew? What holds it together (or keeps it from falling apart)? Manhattan has its grid; Paris, its axes; Bei-Jing, its central Forbidden City—all we have in Los Angeles is a puzzle. From an airplane, one may speculate that like other American cities, we are a product of the industrial revolution, a modern extension of Roman planning. Driving into town, however, one might decide that we are a linear city, a system of freeways, a seemingly endless series of lanes. Maps emphasize different qualities, but satellite photos show a flat gray texture surrounded by mountains and bordered by ocean. What is the origin of this challenge to nature? How is this seemingly endless spread organized? How to comprehend a gray presence so large, so overwhelming, yet still considered one place?

Los Angeles has been labeled an anomaly—different than other U.S. cities—its urban plan not conforming to East Coast and European centralized prototypes. Traditionally, historians have painted a convenient picture of a small Pueblo growing into an expansive grid. Post-World War II decentralization inspired another description. Writers disregarded the center and focused instead on huge subdivisions interconnected by lines of mass transit. More recently, theorists have attributed Los Angeles’ “extended, open, unbounded matrix” to American capitalist origins, citing its unique character and “decisive departure from European models.” Yet even with three basic theories to choose from, we are left with fundamental questions about the city’s underlying structure; its placement of commercial centers, its choice of lines of communication, its relation to the landscape—the intrinsic features, elements and characteristics that together form an invisible layer. An organic layer so seamlessly integrated that it is not seen by the contemporary eye—so seamlessly integrated that a review of the history of Los Angeles’ growth reveals but a shadow of its surprisingly consistent patterns. Los Angeles is both unlike and just like other American cities—a composite of lines and grids, laid over the landscape, two distinct organizations, pushing and pulling, expanding and contracting, yet still married and inseparable.

The bright Southern California sun, through summer, spring and fall, reflects off the glass walls of Los Angeles’ new skyline. In winter, however, a gray fog can give the towers an eerie appearance. Wind and drizzle blow through empty plazas, around abstract steel sculptures, along lines of planter bushes, and over beds of carefully tended flowers.

Before the high rises, these same gusts billowed the curtains of antique houses, clapboard apartments and brick hotels. Bunker Hill was a quaint old-fashioned neighborhood. Steps ran up steep slopes, benches faced city views, narrow alleys ran between rows of buildings, streetcars rumbled through tunnels and wind breaks of mature trees swayed up top. It was a place that grew slowly, maturing gracefully over time.

Prior to Bunker Hill’s “redevelopment,” writer Kevin Lynch included it in his 1960 urban study The Image of the City. It may seem surprising to today’s reader that Los Angeles was selected not for its smog, diverse population, jammed freeways, or notoriety for violence, but instead for its “utterly different scale and central grid iron plan.”

“As the core of a metropolis, central Los Angeles is heavily charged with meaning and activity, with large and presumably distinctive buildings, and with a basic pattern: its almost regular grid of streets.”

Lynch’s map of visual form indicates Pershing Square as a central node “sitting in the crook” of Seventh Street and Broadway. The Bunker Hill “district” was described in the study as having a “relatively weak” urban image. Some would argue that this evaluation applies more accurately today, but why was a rare, intact, nineteenth century neighborhood seen in that light then?

Standing out on the Main Street Hotel fire escape, driving by the warehouses south of Sunset, meeting for drinks at a plush Hollywood Boulevard restaurant, searching through the bars on Central Avenue, buying a second-hand suit at the Goodwill on Broadway. Readers of Los Angeles literature can easily imagine the buildings in these scenes. They are old buildings, brick buildings, old faded dusty brick buildings.

In film, brick is the backdrop for urban scenes. In song, lyrics depict street life bordered by brick. Painters, photographers and poets all use brick to build their images and frame their ideas. When Bukowski has a fist fight, when Jim Morrison and Donna Summer cruise the Strip, when Gene Kelly sings in the rain, the background is brick.

Brick buildings line our commercial corridors—old, ordinary, brick buildings with one, two or perhaps several floors, an entrance on the sidewalk, a sign in front and merchandise in the display window. These are the more mature buildings that comprise our city’s skeleton. The cleaners, the corner drug, the neighborhood market, the pizza parlor, the roller rink, the ninety-nine cent store, the video rental.

And beyond the railroad tracks, there are more. The auto parts supply, the tire repair, the garment factory, the lumber yard, the import/export business, the antique barn, the coffee house, the artist loft, the trendy restaurant, the small theater. Whether they’re styled Egyptian Revival, Streamline Modern or English Tudor; whether they have reflected mirror balls, full-size missles, checkerboard entrances, giant sunflower facades or mural scenes from Fiddler on the Roof; whether they have been glazed, sandblasted or painted like a cow; these are the buildings we constantly use, the buildings we spend much of our lives in. Buildings built before concrete, steel and glass were so easily manipulated. Brick buildings, old faded dusty cracking brick buildings.

Ancient L.A.
Indigenous roots of Los Angeles’ layout, center, commercial corridors and the buildings that line them.
Progressive L.A.
L.A.’s planning achievement, its sabotage, how it was done, who did it and why.
Echo Park Rhythm Section Series

Although paved over, L.A.’s spirit remains. Visions rise from the asphalt guiding vegetarian musicians like Marc, an Angelino Heights rare bookseller who rides a bike and packs gourmet lunches for his over-worked wife. What happens when he lands a holiday gig at downtown’s most exclusive (meat-eating) haunt?